Frittenden is a Rectory with records of its incumbents going back to 1279 when St Augustine’s was the patron of the parish.

The difference between a Rector and a Vicar is largely historical.  A Rectory was a benefice in which the Tithe was paid to the incumbent.  The incumbent was known as the Rector and the Benefice house, where he lived, was also known as the Rectory.  Tithes were monetised under the Tithe Act of 1839.  The Tithe Act 1925 transferred the tithe income to the Queen Anne’s Bounty fund, which supplemented the income of poor clergy.  The Tithe Act 1936 extinguished tithes altogether, Government Stock being issued in compensation.

Clergy houses are collectively known as parsonages but will normally be known as The Rectory or The Vicarage usually based on the historic status of the Benefice.

The current Patron of the Benefice of Sissinghurst with Frittenden is the Church Pastoral Aid Society (CPAS).

Rectors of Frittenden and [Patron], where known

* Frittenden combined with Sissinghurst, a vicarage, from this date

The information on this page has been kindly provided by the Frittenden Historical Society. 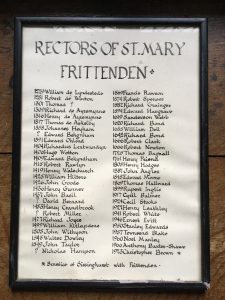 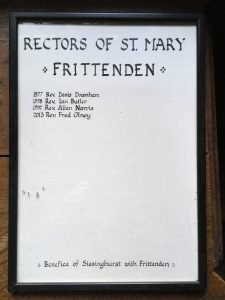