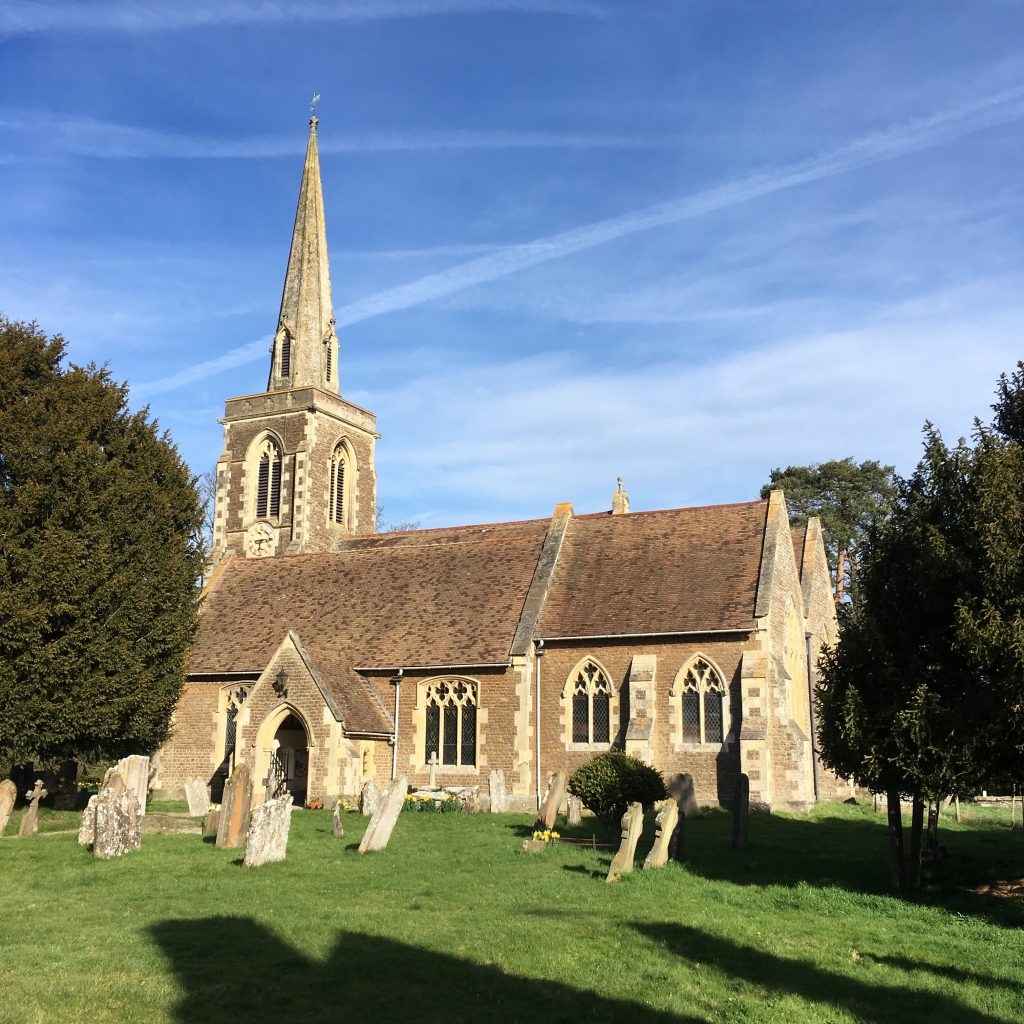 St Mary’s is a Church of England Church which is a Grade ll* Listed Building of architectural and historic importance. It is built of brown Wealden sandstone and Bethersden marble with Caen stone dressings under a tiled roof. It sits in the centre of its churchyard.

A church has existed in Frittenden for some 800 years and was mentioned in the ‘White Book’ of St Augustine’s Abbey, Canterbury around the year 1200. The parish has recorded the names of incumbents since 1279.

The medieval church fell into disrepair in the 18th and early 19th centuries but in 1839 the Rev. Edward Moore, a grandson of John Moore (Archbishop of Canterbury 1783-1806), was appointed to the curacy of Frittenden. He had considerable personal wealth and after restoring the Rectory (now Frittenden House) he paid for the church to be largely rebuilt between 1846 and 1848 to a design by the Birmingham architect, RC Hussey of the partnership Rickman and Hussey.

Most of the church, except for the nave and the lower two stages of the 15th century western tower, was demolished and rebuilt with a new chancel and south chapel, a wider south aisle to the nave and new north and south porches (the north now being the vestry). A new upper tower houses the belfry and is finished by a recessed stone spire with enriched lucarnes. There are stone clock faces on the north and south elevations of the tower. The rebuilt church features Decorated style fenestration with segmental heads and reticulated tracery to the nave, split cusp and geometric tracery to the chancel and cusped tracery and pointed arch heads with hood moulds to the chapel. The west doorway and the Perpendicular windows above are 15th century and considered to be good quality.

An addition was made to the church in 1861, when a north aisle was added to accommodate the owners of Frittenden House and Comenden Manor.

The oak woodwork of the pulpit, choir stalls, the screen between the nave and chancel and the font cover all date from the restoration. The half-height screen features a quatrefoil frieze and an iron spiked rail. The octagonal stone font at the base of the west tower has a two-tier wooden cover with an iron and brass font crane.

The chancel has a trilobed piscina in the north wall and it has an interesting black and white tiled pavement. The painted stone surround to the east window creates a triptych effect with commandment texts in the flanking panels. The carved wooden altar is a fine example of a decorated frontal and oak top and dates from 1925.

The splendid east window of the sanctuary is by the eminent artists Messrs Bucknall and Comper of London and is dedicated the Rev. Moore and his wife, Lady Harriet Moore. According to J. Ninian Comper’s notes, ‘the design is to represent the life on earth of activity and suffering, and in heaven repose and reward’.

The beautiful stained glass window in the north aisle by Ward and Hughes commemorates the three daughters of the Rev Edward Moore and his own fine memorial cross (1921) stands in the churchyard by the main path to the church.

Other windows are in plain leaded-lights, decorated leaded-lights and grisaille. During the second world war, some windows sustained damage, with the exception of the east window, and were restored by Messrs. F Bowman Glassworks of London. The two south windows in the south aisle have decorated leaded-lights with painted quarries, stained and painted inset medallions and coloured borders and probably date from the restoration.

The organ – an unusually fine instrument to be found in a village church – was built in 1907 by Messrs. Peter Conacher & Co. and was originally in the south chapel. In 2015, as part of a current reordering scheme, the organ was relocated to the north aisle and restored by Peter Wells and the opportunity was taken to add a trumpet section. Two toilets, one wheelchair accessible, were built in the former organ space.

According to RC Hussey’s description of the original structure, some wall foundations were found to contain Roman-British concrete. There was also some quatrefoil moulded brickwork, almost certainly of 14th century origin and probably manufactured in Frittenden, and Hussey built the best of these into the north wall of the chancel. Other relics of the former church are a brass and two stone tablets commemorating three former rectors who had unusually long innings, in one case of 59 years. The amputated hand of a man called Cornish, who was injured in a shooting accident, is said to have been placed in a coffin in the south pillar of the chancel arch during the rebuilding.

The churchyard, which provides a delightful setting for the church, is entered through a lychgate erected in 1917 to the memory of the gallant Rector, the Rev. Rupert Inglis, who was killed in action during the first world war. The churchyard has several Grade II listed features: three chest tombs, the memorial cross to Rev Edward Moore, an octagonal stone base originally with a brass sundial dated 1847 (dial stolen), a stone bier house with a large quatrefoil window from the former church and a long section of stone boundary wall. There is a cottage on either side of the lychgate, contemporary with the church and built with the same materials.

The church, the churchyard and the associated buildings and features make a charming ensemble, even more so when sheep are keeping the grass down.

Bible verse of the day