S.P.A.C.E. is a quiet and reflective service held on alternate Wednesdays at 9.00 am.  In Lent the service is held weekly.  For the first fifteen minutes we sit or kneel in silence.  The order of service contains a short reflection, a brief passage of scripture, and an image – usually a painting – relevant to the scripture.  We may use that time for our own thoughts but the reflection is there to read alongside the bible passage and image if people want to.  This period of silence is followed by prayers usually drawing on themes from the passage and reflection and the service ends with a simplified celebration of Holy Communion.  The whole service lasts for a half-hour.

As we cannot meet in church at this time here is the reflection and image I would have included today, Wednesday 25th March. It is part of a series for Lent reflecting on seven encounters between women and Jesus in John’s gospel.

You may like to read the passage first (John 12:1-8).  You can find this after the reflection. 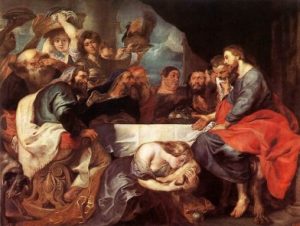 A woman kneels, illuminated, at the centre of this painting.  Shockingly she clasps the foot of a seated man.  He points to her, responding to the remonstrations of a man dressed in black seated opposite him.  It is the moment when Jesus defends her action.  “Leave her alone”, he says calmly and without embarrassment at her extravagant and emotional gesture.

The story of a woman anointing Jesus’ feet at a meal at a house in Bethany appears in all four Gospels.  Matthew, Mark and John place this in the days leading up to Jesus’ trial and crucifixion, whereas Luke puts it rather earlier in Jesus’ ministry.  The details vary and no account is complete.  It is even possible that the event occurred twice.  For centuries Christians have wrongly assumed the woman was Mary Magdalene and compounded this error by suggesting that Mary Magdalene was a prostitute yet there is no biblical basis for either assumption.

John makes clear that the woman is Mary, sister of Martha and Lazarus, and he emphasises her central role at this point in the gospel story.  He refers to her brother’s death and resurrection (v1) and forward to Jesus’ coming death (v7) and by implication his resurrection.  On the earlier occasion she had thrown herself at his feet.  Her weeping at the loss of her brother was tinged with reproach that he had not been there when needed: “Lord, if you had been here, my brother would not have died.” (John 11:32).  Now she throws herself at his feet once again in a gesture of extravagant gratitude for what Jesus had done.  The stench of death has been replaced by the sweet aroma of nard.

Intuitively, and uniquely among those present at the meal, Mary seemed to catch the sense of what was going on.  It was a time of profound change with little room for the constraints of social convention that limited men and women’s social interaction.  This degree of personal contact between a man and a woman in public – and a woman whose hair was uncovered and let down to dry Jesus’ feet – was quite scandalous.  Rubens hints at this by showing an uncovered shoulder.

In contemporary western society we might be less shocked by the bare shoulder or display of intimacy than by the apparent wastefulness of her action, a point that Judas makes (though from baser motives).  But Mary sensed that this was no time for utilitarian arguments or cost-benefit analysis.  She had seen extravagant love in action when Jesus restored her brother to life.  Nothing she could do could match that extravagance.  Even if it were her most valued possession, did this matter?

Please reflect on these questions in your own prayers today

Jesus’ comment, “You will always have the poor among you, but you will not always have me” (v8) needs clarification.  It used to trouble me as it seemed to be an uncaring acceptance of social injustice contrary to all his teaching about the poor and marginalised.  I found one commentator’s paraphrase of that verse is particularly helpful “The poor will always be a part of this poor people’s campaign; the poor are the constituents of my movement, but I—your teacher Jesus—am about to leave.”

12 Six days before the Passover, Jesus came to Bethany, where Lazarus lived, whom Jesus had raised from the dead. 2 Here a dinner was given in Jesus’ honour. Martha served, while Lazarus was among those reclining at the table with him. 3 Then Mary took about half a litre of pure nard, an expensive perfume; she poured it on Jesus’ feet and wiped his feet with her hair. And the house was filled with the fragrance of the perfume.

4 But one of his disciples, Judas Iscariot, who was later to betray him, objected, 5 ‘Why wasn’t this perfume sold and the money given to the poor? It was worth a year’s wages.’ 6 He did not say this because he cared about the poor but because he was a thief; as keeper of the money bag, he used to help himself to what was put into it.

7 ‘Leave her alone,’ Jesus replied. ‘It was intended that she should save this perfume for the day of my burial. 8 You will always have the poor among you, but you will not always have me.’

This Lent we will be reflecting on seven encounters between women and Jesus in John’s gospel.

Bible verse of the day

For physical training is of some value, but godliness has value for all things, holding promise for both the present life and the life to come.
1 Timothy 4:8